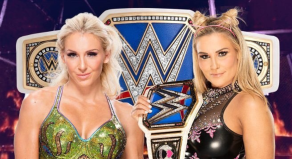 I hadn’t even realized the fact that Charlotte and Nattie would be making history by fighting each other for the SDLive women’s championship on Sunday at Hell in A Cell. Until I saw Natties Instagram post I hadn’t really thought about the fact that they have fought each other for every women’s title WWE has. The NXT Women’s Championship, The Divas Championship, The Raw Women’s Championship and come Sunday, The SDLive women’s championship. Being a HUGE fan of both of these ladies for such a long time, this is really freaking awesome.

Every wrestling fan has that one or handful of wrestlers that have drawn them to WWE, or kept them watching, or just inspired them to be better. Nattie and Charlotte are two of those people for me. They got me into women’s wrestling, they help me believe in myself. I swear they make me a stronger woman just by being who they are.

The two Queens of WWE always remind us who they are when they square up in the ring, and no I don’t just mean they’re a Hart and a Flair, although they prove they can live up to their families’ names as well… but they prove so much more. They prove what I’ve known for so long, that women can be better than men in this industry. They prove that the best does come to those who deserve it. They prove they deserve to be champions. They prove why they deserve the main event spots, the longer segments, the bigger matches and so on. And I don’t JUST mean Nattie and Charlotte either, all the women have proven EVERYONE wrong.

No matter who walks away with the SDLive women’s championship on Sunday at HIAC, I know that I’ll be the real winner. Getting to watch these two incredible human beings going toe to toe for this championship, something they’re no strangers too will be incredibly exciting for me. They have insane chemistry in the ring together, they’re both so strong in their current roles, and they’re both A+ talents inside of that ring.

I’ve looked up the Nattie and Charlotte for a LONG time now, many people know that’s no secret, and I’m so proud of them both. I’m so proud of Nattie for holding her ground, always doing what was asked, always being a strong, powerful burst of light. She deserved so much more than what she had been given the last few years and to see her finally holding gold again after so many years legitimately made me cry. While people believe Charlottes had it easy when it comes to her job in WWE, it’s no secret that outside of WWE hasn’t always been a breeze for her. Seeing who she’s become today, her transition from NXT to now has been such a treat to watch. She’s showed such strength and determination, and as I mentioned before they both make me want to be a stronger, better person.

At HIAC Charlotte and Nattie will face one another for the fourth title they’ve fought over, they’ll show why women’s wrestling is important, they’re show they have lived up to they’re family names but also that they are their own person as well. Anytime Nattie and Charlotte get in the ring together magic happens, I expect Sunday will be no different.

There is probably so much more I could say, but I’ll leave it with, I am so proud to be a fan of these two extraordinary women, and I’m so excited for their match on Sunday!