Let me just touch on this real quick and then I won’t mention it again. I completely understand the argument of “Those people paid they’re hard earned money and they can do whatever they want” sure, okay. AND THEN there’s the argument of These guys are putting their lives on the line, heart and souls into the matches, have some freaking respect. Sometimes they give us matches that are stupid, don’t make sense, have people in them that we genuinely don’t care about, totally get that. Finn Balor, Cesaro, Sheamus, Jason Jordan, Seth Rollins, Dean Ambrose, Samoa Joe, The Miz and so on do not fit that. These are THE guys. The guys who whole heartedly deserve for you to be cheering on, or booing, just paying attention to the show they’re putting on for YOU.  I read the argument of well if you were in the arena you’d be having fun with the beach ball too, you’d hit it around just like everyone else. No sir, I absolutely would not, and if I was feeling ballsy enough, I’d pop the damn thing. I can’t put it any clearer that I think it is the rudest thing ever when the crowd tries to make it all about them. The show is for YOU, YOU paid money to watch wrestling didnt you? If you wanted to play with a beach ball, it’s august, go to the damn beach.

Okay So Monday Night Raw! I was so entertained through the entire thing, I focused much more on the matches than my phone, more than I have in QUITE a long time.

My top  three moment of the show were:

The rest of the show was great too. Our main event of Roman and Cena teaming up to take on Joe and Miz was outstanding. Not only were the two teams randomly thrown together in the BEST way, but they worked together great and we got one hell of a post PPV main event. We even got a Brooklyn street fight, between Enzo and Cass, that could have been absolutely awful, but it wasn’t. Although Cass did hurt himself, and whatever is happening with his knee I hope it’s not too serious and he doesn’t miss too much action. Elias had a fight with R-Truth and while you’d think that would not be the greatest thing, it was actually decent. I think Elias is excellent, and i wish they’d get him in a proper feud so he could really show it, and honestly he doesn’t get to show it much but R-Truth is nothing to snuff at. The Cruiserweights had a nice eight man tag team match. I wish this cruiserweight thing was going better. I can’t help but think that most of these guys would be better off if they weren’t just sucluded into this 205live thing. Fan favorites like Cedric Alexander and Rich Swann, and Heels like Tony Nese could be much better just wrestling along with the rest of the roster. Finn Balor vs Jason Jordan was a surprising match that i wasn’t so sure about. They quickly changed my mind. They had a DAMN good match. They both looked outstanding, and i wouldn’t mind seeing it again. The ladies could have been much better. I would have done anything to see Emma and Nia have a REAL fight because those three minutes they had on Raw was not a fight. Was it even three minutes? I don’t even think so. They’re trying to hide the fact that they’re making the womens matches less and less and less but we’re noticing and it’s not going to fly much longer. Sasha and Alexas back and forth was okay, again really short but there wasn’t much to make it any longer. I love Alexas come backs to whatever Sashas says. I’d love to see her snatch the title back next week during their rematch and prove herself right that Sasha can’t defend it, but I don’t think we’re going to see that again, and it’s a shame that Alexa is the No Mercy commerical and might not even be in the womens match at the PPV. I hope i’m wrong with that though. How does Alexa vs Sasha vs Emma vs Nia sound? I kind of seriously love it. but I wouldn’t hold my breath for it.

On to Smackdown Live!

My top three moments were:

and to go a little more into detail:

Bobby Roode man. I can’t tell you how happy I am to see him on the main stage in WWE. When I was still watching “TNA” well when I first started in like 2008 or whatever it was, this guy with james storm drew me in. So seeing him from then to now, this is so exciting. And well a huge part of me wanted him to answer Styles US open challenge, but him and Styles in the same WWE Ring will come and it will be well…. GLORIOUS 😉  Shelton Benjamin is FINALLY back in WWE. I’ve only seemed some of his work, but some is all you need to see to know this guy is oozing talent. He’s going to be bringing a whole lot of talent to the SDLive roster AND apparently to the tag team division as he is now teaming up with Chad Gable. And I’m all for it.  Nattie looks so GOOD with that championship! They said it’s been almost 3,000 days between her last title reign and this one. THAT’S INSANITY. So is her having to team with Carmella tonight. It was quite obvious Carmellas idea was to let Nattie get beat down, not help her and then just help herself to her title… thankfully Nattie turned the tables, and got her into the match and she took the pin. Well Nattie lives to be champ another few days and I’m grateful for every day.  Great to see the Usos tonight, truly in their element. I have followed these guys literally SINCE DAY ONE and this version of them is definitely my favorite, no question. They are on a roll with this, and they’re 4x champs, and they really are on top of the SDLive tag team division. I’m kind of intrigued where they’re going with Dolph. I like that he just kind of shot the wind in his backstage segment. He’s not wrong. It’s like what does this guy have to do for him to get any recognition for how talented he is? The Tamina and Lana team up is also intriguing after that backstage segment. Why Tamina is going to Lana for help becoming champion I don’t totally understand but we all know Lana’s a good manager, so maybe it actually does make perfect sense? Or maybe everything is just completely backwards and that’s totally okay too. Nakamura having to fight the singh brothers was a little blah, but it also means that Nakamura isn’t going to just be sent off out of the WWE Title picture, and that, to me is excellent news. Owens going to Zayn first to be the special guest ref was interesting but also kind of made sense. It also made sense for Zayn to tell KO where to shove it. Seeing Baron be the guy to be the ref adds a whole different dynamic to it because while KO picked him, neither guy can actually trust him. And also Baron went from Mr. MITB to special guest ref is a little depressing, hope that gets straightened out. Another quite wonderful AJ vs KO encounter. Full with shenanigans and all. It’s also nice that it’s over. New challenges for AJ AND this KO vs Shane feud can truly get underway because it’s coming and I’m actually so excited for it. 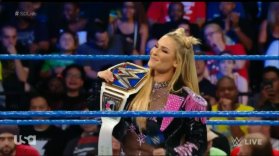 Such a successful four days of wrestling! Takeover was PHENOMENAL, Summer Slam was excellent, Raw stepped it up BIG TIME and SDLive finished us off strong. We can only hope that this continues!