This weeks Raw and SDLive thoughts!

I took a much needed break from the wrestling world and I didn’t mind it one bit. I remember when I used to freak out about making sure I was home for Raw and Smackdown and that was only a year ago. Now? There must be a particular match I know is happening or a moment I know is about to go down for me to be excited about it. I wish that Raw and Smackdown were still must see TV for me, but it isn’t. I went a few weeks where watched Netflix instead of Raw or Smackdown and I thought maybe I was just more interested in the show I was binging than I was about what was happening in the wrestling world now. But then I finished that show and attempted to watch Raw last week and I had zero interest. I think I might have watched one or two segments and then just ended up watching re-runs of everybody loves Raymond. I still love wrestling, with all my heart, but as far as making sure I’m home and looking forward to watching Raw and Smackdown, there’s not much that draws me in that seriously anymore. And that’s a dang shame.

I did watch both Raw and Smackdown this week. I’m excited for Summer Slam, the matches look great, the talent is of course always there, so I need to be up to speed on what’s happening, at least somewhat. So in between other shows of course, I really tried to pay attention to what was happening, so here’s what I thought of Raw and Smackdown this week as we get closer and closer to Summer Slam.

I think I’ve made it very clear how important women’s wrestling is to me. It really, really stinks for Bayley that an injury is keeping her from competing at Summer Slam. I was excited to learn that WWE was going to be having two triple threat matches this week to determine who would fight one on one next week to determine a new number one contender for Bayleys spot to face Alexa Bliss. Then I thought about it for about 30 more seconds and realized that these triple threat matches were nothing more than a formality. Sasha and Nia would be in two different matches, both winning and going to face each other next week with the LARGE probability of Sasha winning to face Alexa at Summer Slam. Ugh. I don’t HATE Sasha Banks, I’m not much of a fan besides the fact that I know the girl can throw down and have outstanding matches, which is a huge thing for me, but I wanted someone else. Not necessarily Nia Jax either. Honestly I wanted them to shock us and throw Emma in there, throw Mickie in there even, but no. Sasha and Alexa apparently have some real life beef that plays out when they’re in the ring together and that’s some great stuff, I’ll never deny that, but if I’m right and Sasha does win next week and becomes number one contender, then no question I’m Team Bliss to retain at Summer Slam.

Cesaro and Ambrose put on an incredible match, one where I didn’t even want to look away from the TV to check my phone and it’s very rare that, that happens anymore. When the match was announced I knew I’d force myself to stay awake because I knew what those guys were capable of in the ring and a one on one match between the two would be amazing. I was right. It was outstanding. I missed Rollins vs Sheamus but something tells me that match was probably pretty great too. The angst between Rollins and Ambrose is really working with the crowd and fans in general. I like the angst, I think it’s incredibly smart of them to have Ambrose still pissed, and hurt about being burned by him even if it was three years ago. I think that Ambrose finally being in a place to do the fist bump and ultimately being denied by Rollins this past Monday was also super smart. Playing this out for a long as they can is exactly what they should do, but they just have to time it all perfectly before the crowds begin to turn.

Yes, we’ve seen Reigns and Strowman fight a TRILLION times, but it’s always good stuff isn’t it? Yes, yes, it is. The ending was a little hanky with the counting and with Joe but those two throw literally everything at one another no matter what type of match they’re in and this last man standing match was no different. It still amazes me how people can honestly still say that Roman can’t wrestle and can’t put on a good match when time after time that’s EXACTLY what he does. I understand how fans have turned on him, although I don’t agree, but what I can’t understand is how they still refuse to admit that the guy can go in the ring, because he can. This fatal four way match at Summer Slam should be a huge throw down between these four guys and then hopefully Roman and Braun get away from each other a little bit, I just hope that Strowman can maintain his followers even after he’s done with Reigns.

So, I didn’t watch the Brock Lesnar/Miz TV thing for two reasons, one being my shadow hunters show was on and two, I hate Brock Lesnar and I don’t wish to watch any segment that he’s in. I didn’t see any real point to Brock throwing around Miz and the Miztourage like a couple of rag dolls and I’m kind of confused as to what Miz is doing at Summerslam. It’s in two weeks, is our IC Champion facing Jason Jordan? Yes no? I honestly am so lost, maybe that’s my fault for lack of keeping up but Miz and the IC Title are the number one champion/championship on Raw for months when Brock couldn’t be bothered to show up and while I’m glad he has shown his face as they head into Summerslam, I still didn’t get the point.

I didn’t pay much attention to enzo and big show vs Gallow and Anderson but I did pay attention to the match of Cass vs Big Show at Summerslam with Enzo suspended above the ring in a shark cage. I’m all for Big Cass vs Big Show, but the fact that Enzo is going to be hanging above the ring is going to completely take away from these two big guys fighting one another and that annoys the crap out of me, really, REALLY annoys the crap out of me.

Loving the Finn and Bray stuff. This is something that even when I didn’t watch Raw I would check WWE’s twitter page or instagram to see what went down with them both. I am REALLY hoping that Balor brings out of the Demon for their Summerslam match. There hasn’t been any sign of the Demon in quite some time and this feud with Wyatt is the PERFECT time to bring him back out. Fingers Crossed!

I would be the happiest gal in the world if Tozawa was finally able to kick Neville off his throne. Someone HAS to do it, and preferably soon and not only is Tozawa insanely talented, his connection with the “Titus Brand” would have a win at the PPV huge for both of them. 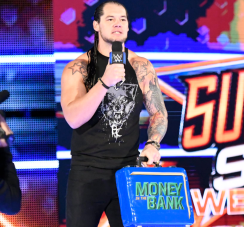 This Owens/Styles with Shane thing is insane. There are so many unstable factors going into this Summerslam match and I think that makes it extra exciting, not to mention that KO and Styles never, ever disappoint.

I will admit that I wanted more from Naomi and Carmella. I also will admit I wish that Ellsworth suspension lasted FOREVER. It was all cute and crap at first and now it is just BEYOND annoying. I will admit I appreciate that Lana is seriously trying, even if she does something crazy like think she can call out Charlotte this early, but still she’s ambition. I can respect that and have patience as she figures out here footing, as long as there’s progress I’ll stay patient.  I wonder if they’re going to throw together Charlotte and Becky vs Tamina and Lana for Summer slam because I’d be insanely shocked if those two were kept off the card completely.

I missed most of the Usos vs Dillinger and Zayn and was bummed about it so thank goodness for youtube clips. Tye Dillinger looks like 100 bucks out there in this match, something we haven’t been able to see because it’s apparent that WWE doesn’t know quite what to do with him regardless of his huge following so it was great to watch him shine in this match and the idea of him teaming with Sami makes so much sense and I loved it. What I loved even more was more New Day/Uso business. With the New day always having so much fun it’s easy to forget that they can get serious real quick and get down to business and I think they reminded everyone of that especially the Usos. They’re so freaking fantastic together and I’m super pumped for their Summerslam match for the titles.

The John Cena and Baron Corbin thing is something I never knew I wanted and I am now insanely excited for it. They’re in ring and probably out of the ring personalities clash so well that it makes for great entertainment and what should be a fantastic summer slam match.

The Randy Orton vs Jinder Mahal grudge match was actually the better of their couple of matches in my opinion. The prison match was a mess and I loved that thing Sing brothers had no part in it. It nicely closed the feud where Randy can focus on Rusev and Jinder on Nakamura, both in which i’m very much looking forward too because they’re new and extremely fresh.

The matches we have set heading into Summer Slam look great. The fact that Summer Slam is a whopping 6 hours long with the pre-show being 2 hours is not so great. Sitting that long as home watching it can be taxing, I remember it was last years, I can’t image having to sit through it all being there live. But to see your favorite talent and such I guess we’d all suck it right? probably. Hopefully Summerslam will be full of energy and keep every engaged in what’s happening or man those six hours are going to feel like six long days. Fingers crossed!