In this day and age it’s not very common that you come across someone who did, does, or is going to have Netflix. Personally I think it’s money well splurged. I go through an interesting process with Netflix, either I’m constantly hooked on something or I’ll spend a couple of weeks watching no Netflix at all, but that’s usually when I’m getting over a recent binge, and contemplating starting another show and throwing myself back into the Netflix cave. I’ve found some wonderful shows because of netflix, It’s where I first got introduced to The Vampire Diaries, Lost, Gossip Girl, Greys Anatomy, Supernatural, and obviously the list goes on. I’m the exact kind of person that Netflix Caters too. I find a show and I literally let it take me over. It’s probably not healthy, but for a while it’s wonderful to just get lost with your laptop and not worry about anything else. I’m currently lost in Arrow, a show which, I should have binged on a long time ago, but at least I finally got around to it. I’m on season five and figure by the beginning of next week, if not sooner, I’ll be done with it and lost trying to find something to fill the “void.” 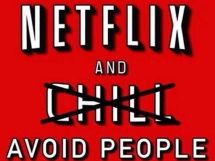 The point of this post is to share a couple of shows Netflix offers, that are also still on TV & will have new seasons coming soon, that I absolutely love and highly recommend you consider for your next binging session!

And here’s a bonus one.

I’m always looking for a good show to get engulfed in. After I finish up Arrow I’ll be looking for another one, so please share any you think I’d might like. I’m not really picky, but syfy is certainly my number one thing. 😉