Since it’s National Vegetarian Week I decided today’s post would be highlighting the product that helped me be able too make the transition to being a vegetarian so much easier than I ever thought it could be.

I’ve written about this before but I became a vegetarian for a few different reasons but what helped me was seeing an old friend of mine, who was a vegetarian, have such an easy time with it! We’d be camping and she’d have some kind of morning star farms product in the fridge and it was so easy for her to use it as a substitute for whatever meat product the rest of her family or friends were eating and sometimes she’d share and it was always SO good. So when I made the final leap into leaving meat behind Morning Star was my go to substitution and sometimes, four years later, it still is!

While I’ve found different products and have become more attached to cooking with fresh products, Morning Star is still in my freezer. Specifically the Bacon Strips. I’ve never been much for breakfast but throw some morning star bacon on the plate with a vegan Big Sur breakfast burrito and it’s the perfect combination. 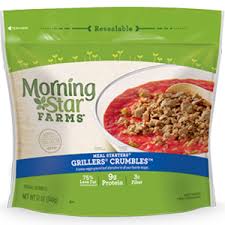 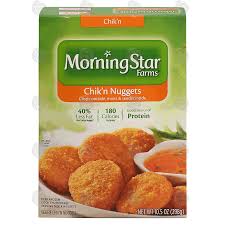 Above are just some of my favorite products from them. Their veggie burgers are perfect especially for a BBQ or if you just want a burger and fries, I highly recommend their tomato basil burger! They also have a vegan burger, the roasted garlic and quinoa burger is delicious! I used to love Chicken Parm, so when I realized MSF also had a chik’ patty that not only was delicious but the perfect substitute for chicken parm I was so happy.  Also they have a “crumble” which is PERFECT for tacos!! My point with all these examples is that knowing that Morning Star had so many options, delicious options, and wasn’t that expensive made me more confident that I could make the switch and more importantly stick too it.   You don’t have to be a gourmet cook or spend a TON of money in order to be a vegetarian or a vegan for that matter. It just takes a little research, and to be smart about making sure you’re getting all the nutrients you need to stay healthy. I could never ever go back to eating meat, and cutting it out, was one of the best decisions I ever made.