There have been some great wrestlemanias but there’s something about this one that feels even better. Leading up to this WM, I went back and watched the last few WM and with that fresh in my mind, this WM card blows them right out of the water. I’m genuinely excited for all the matches ( except Brock and Goldberg but that’s personal) and in the last seven WM that’s never happened. So without further ado here’s my WM33 predictions!

8. Nikki Bella and John Cena vs Miz and Maryse.

11. The Undertaker vs Roman Reigns.

Let me end this with expressing how I am still angry the Usos don’t have a defense at wrestlemania. They won the titles and they’re the only champions not defending. They could have American Alpha fight them, Breezango, any of the SD live tag teams but nope, they’re all in the battle royal and I think it’s bullcrap. NOW aside from that this card like I said before looks outstanding. I hope no ones matches get cut with time because of the unnecessary musical performances. If they can manage to leave all the unnecessary crap aside… like in ring talking segments, backstage crap, and so on, this could be the best WM in a while… with the Universal Championship situation aside of course. 😉 & our hosts? they are sure to be entertaining. 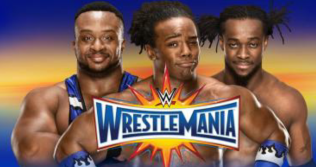