I haven’t “blogged” an award show before… or any show other than wrestling. BUT I decided hey lets give this shot so let us begin…

I love movies, I love the stories they tell and the emotions they bring, but I must admit, I am terrible at watching them when they FIRST come out. It’s very rare that I enter a movie theater, it is something I wish I did more often. So for me watching these award shows such as the Oscars isn’t necessarily to see who won for that movie particular movie, but what movies I need to get my butt in gear to see! I know… it’s totally backwards but this is just how I do things sometimes.

Now before we talk about the winners and speeches that I loved, let’s talk fashion real quick. I’m not a fashionable person… for a few reasons, but not for lack of wishing I was,  so watching these red carpets are such a treat for me! Here are just a couple that really caught my eye while I watched.

I believe the dress that really blew me away was Nicole Kidman.

I don’t even believe this picture does the dress justice, Such an outstanding, elegant look that she pulls off magnificently!

Another look that I just loved was Kristen Dunst. 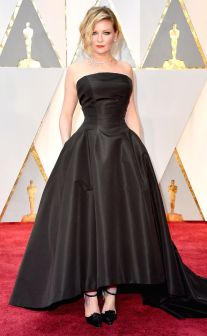 So simple in the black but that necklace just brings it all together… and the hair… perfection!

She is always gorgeous and she looks like an absolute gem in this dress!

Fierce. Insanely fierce is what comes to mind for Taraji. 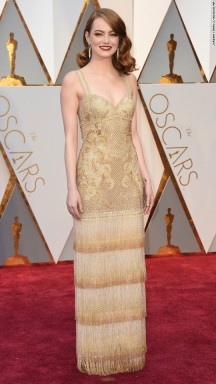 I am beyond obsessed with the fringe on the end of this dress, my gosh!

and I cannot leave out a couple of my favorite men! 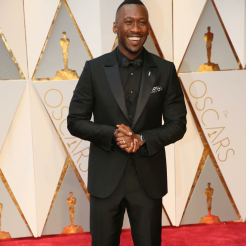 Speaking of Mahershala Ali, he won the first award of the night for best actor in a supporting role for Moonlight. I have yet to see Moonlight, ( definitely on my list!) but I’ve seen Mahershala other work and he is truly an outstanding actor, so big congratulations to him.

Can we talk about Justin Timberlakes opening performance?!?!? What a fun way to kick off the Oscars! I was dancing in my living room… if you can call it dancing that is… and anytime Timberlake is on my TV I revert back to my 10 year old self… and my love for him is as strong now, as it was then, great performance!

The Rock, rocking a blue velvet suit as only he can, introduced this sixteen year old actress and singer Auli’I Cravalho onto the stage alongside Lin Manuel Miranda, and man that girl BLEW ME AWAY! Her voice is outstanding and the song, ” How will I go” is a beautiful song. What a talented young lady!

Viola Davis won an Oscar for best supporting Actress. If you haven’t been under a rock you know that Viola Davis is an amazing actress. Her acceptance speech just brought me to tears.

Asghar Farhadi won an Oscar for Best foreign film in the Salesman but did not attend the award show because he was standing in solidarity with the Iranians and people in the six countries affected by the Muslim Ban, I think that is truly incredible.

John Legends voice is amazing, the choreography and his performance of “City of Stars” that is from La La land, once again reminds me that I MUST see that movie asap. It looks outstanding and has two of my favorite actors/actresses in the two leads.

I just realized something that I truly love… when people you don’t know about get recognized. The Oscars had awards for the people who original wrote the screen plays for the movies, the film editing, the visual effects, production design and so on. The greatest thing about movies to me is the magic that goes into making them, the acting is amazing, but there’s SO MUCH more that goes into making that movie and I really love when all those behind the scene get recognized.

I haven’t seen La La Land but I promise you its at the top of my list. Damien Chazelle won the Oscar for Best Director and also became the youngest to do so, at the age of 32, that alone deserves an applause and considering all the attention that La La Land has received, it is very deserved.