This Women Crush Wednesday I wanted to showcase one of my biggest inspirations.

I first discovered Sophia when I began watching One tree hill on Netflix about a year in a half ago. I then found her kicking butt as Detective Erin Lindsay on NBCs Chicago PD and that show is still my Wednesday night obsession! 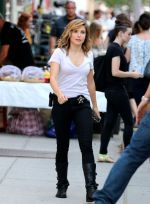 I was quick to follow her on Twitter and Instagram. By doing so I learned that she was SO much more than just an incredible actress.

What I learned was that she is an incredibly passionate woman, and we were passionate about so many of the same things!

She’s an activist for our environment, animals, LGBTQ rights, women empowerment, and Education. I was reading this book called The Promise of a Pencil, by Adam Braun (which everyone should read because it is INCREDIBLY inspiring) and I learned that Sophia has been supporting this cause (Pencils of Promise) as well! There are so many other organizations that Sophia is a part of, or has been in the past that make me incredibly proud to support her. Just a few of those are, The Girl Project, Fuck Cancer, Adopt don’t shop, #MyTrueBeauty and MANY more!  Following her Social Medias truly makes you feel empowered. A tweet might only be 140 characters, but she uses those characters very elegantly. She’s very real, she’s honest and she’s informed.

I’m not sure I could ask for a better lady to look up to!